On November 27, 2021, Bosideng International Holdings Ltd (3998:Hong Kong) released its interim financial report for the 2021/22 fiscal year. The company reported a revenue of 5.39 billion yuan for the first half of the fiscal year, a year-on-year increase of 15.6%, where the core Bosideng brand registered 3.25 billion yuan, a year-on-year increase of 19.1%. The net income attributable to shareholders rose by 31.4%, compared to the same period last year, and reached 640 million yuan, generating a continuous increase in the group's profitability.

The continuous growth of Bosideng's business performance has again demonstrated it as a world leader in the down jacket market.

In today's context of consumption upgrading, consumer demand for high-quality down jackets continues to grow. In addition, international down jacket brands have poured into the market, leading to an accelerated competition of quality improvement in the down jacket category. Bosideng, a national brand known for its specialization in down jackets, empowers its product quality via innovation and improves its product strength and brand awareness constantly, aiming to build core competitiveness and enhance its capabilities against global competitors.

On November 25, 2021, Bosideng launched the Mountaineer 2.0 down jacket. A collaboration with China Aviation Industry Culture Center, Bosideng innovatively adopts aerospace fabric and Beidou Navigation System for Emergency Rescue, one of the three major global navigation satellite systems, in garments, both for the first time in history. In addition, the new design enhances its thermal protection by 15% compared to Mountaineer 1.0 which was launched back in 2019. Rich applications of cutting-edge Chinese technologies in the new series make it 100% China design and top gear in professional functionality.

Enhanced thermal protection and adoption of aerospace technologies make Mountaineer 2.0 a perfect outdoor gear, highly recognized and preferred by seasoned professionals from the industry, including Ci Luo, deputy leader of China national climbing team and leader of the 2020 Everest measurement climbing team, Li Yuansheng, the first and former head of Kunlun station in the Dome A region in Antarctica, and Lei Diansheng, an explorer and top hiker in China. A key milestone in quality upgrading at Bosideng this year, Mountaineer 2.0 became a trendy topic in the industry instantly after its launch and received high recognition from professional users and outdoor institutions.

When focusing on quality-led development and seizing an upper ground in the competitive market, Bosideng also invested heavily in craft innovation and technological breakthroughs, creating a new down jacket category to lead consumption in the market.

At the end of October 2021, Bosideng officially unveiled its Pioneering Trench-style Down Jacket, after two years of deliberate research and preparation. The launch was widely reported and covered by major fashion magazines, including VOGUE, ELLE, and Harper's Bazaar. The Pioneering Trench-style Down Jacket is a perfect combination of two classic categories, the warmth and protection of down jackets and the legendary clean-cut style of trench coats. Organically integrated, the new design is fashionable, warm, fit style, formal-looking, and high functioning at the same time, making it a suitable outwear for business elites in winter. The new down jacket has generated heated discussion and sharing on the Internet and become a winter essential strongly recommended by KOLs on RED and Weibo. Meanwhile, as the Pioneering Trench-style Down Jacket is a great fusion of eastern and western cultures and crafts, it also helps to earn Chinese brands more visibility and voice in the fashion world. 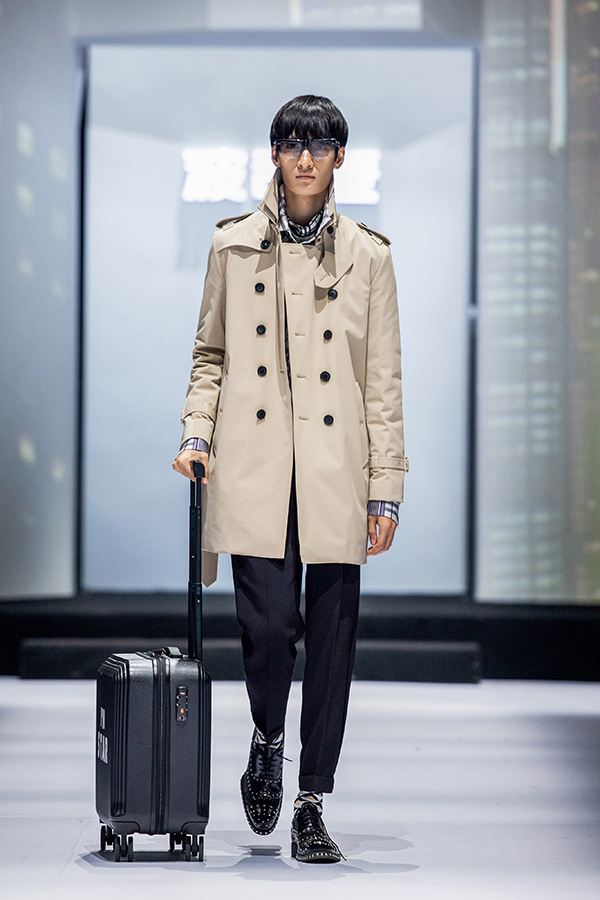 Thanks to Bosideng's strong commitment to quality upgrading and design innovation, it gradually becomes a top preferred brand across the globe by consumers with different needs and from different backgrounds. In this year's Double 11 Shopping Festival, Bosideng once again claimed the championship by sales revenue, reaching 2.78 billion yuan in all channels combined. The brand became the top 1 best seller in men's and women's fashion on 阿里巴巴 Tmall with a 53% growth in turnover. 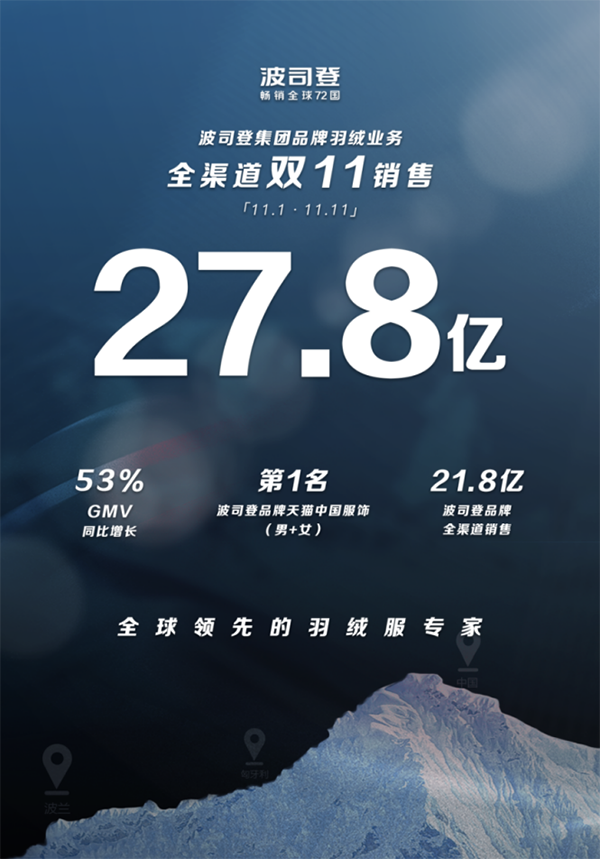 The success of the Double 11 Shopping Festival turnover and the remarkable performance recorded in the interim financial report cannot be divorced from Bosideng's 45 years of dedication to the down jacket market and continuous innovation and upgrading to drive growth. In recent years, since the adoption of the strategy of "focusing on its principal business and core brand," the company has made visible achievements in innovation and upgrading in multiple aspects, including product development, design, channels, and branding. The enhancement in brand momentum and reputation contribute to the steady growth of the business performance.

One example is the overhaul of product design by Bosideng, where measures generate remarkable results. In recent years, Bosideng collaborated with international designers and well-known IPs and set up a multinational design team with the aim to integrate eastern and western cultures, satisfy consumer needs in the global market, and pinpoint the opportunity for product upgrading breakthroughs.

Meanwhile, upgrading new retail channels to connect together "people, products and sites", digitized operations have also helped Bosideng to become a popular choice among consumers. The company's proactiveness in undertaking social responsibilities has also been well recognized by the public. Be it the philanthropic efforts last year of offering 300 million down jackets to help those fighting on the frontline against the Covid-19 or the donation this year of supplies and cash worth 50 million yuan to support the reconstruction of the afflicted areas in Shanxi Province, Bosideng stays true to its commitment of honoring corporate social responsibilities. The continuous heart-warming actions also helped to improve brand recognition among consumers, where the brand is more closely associated with its positioning as an outstanding national brand. 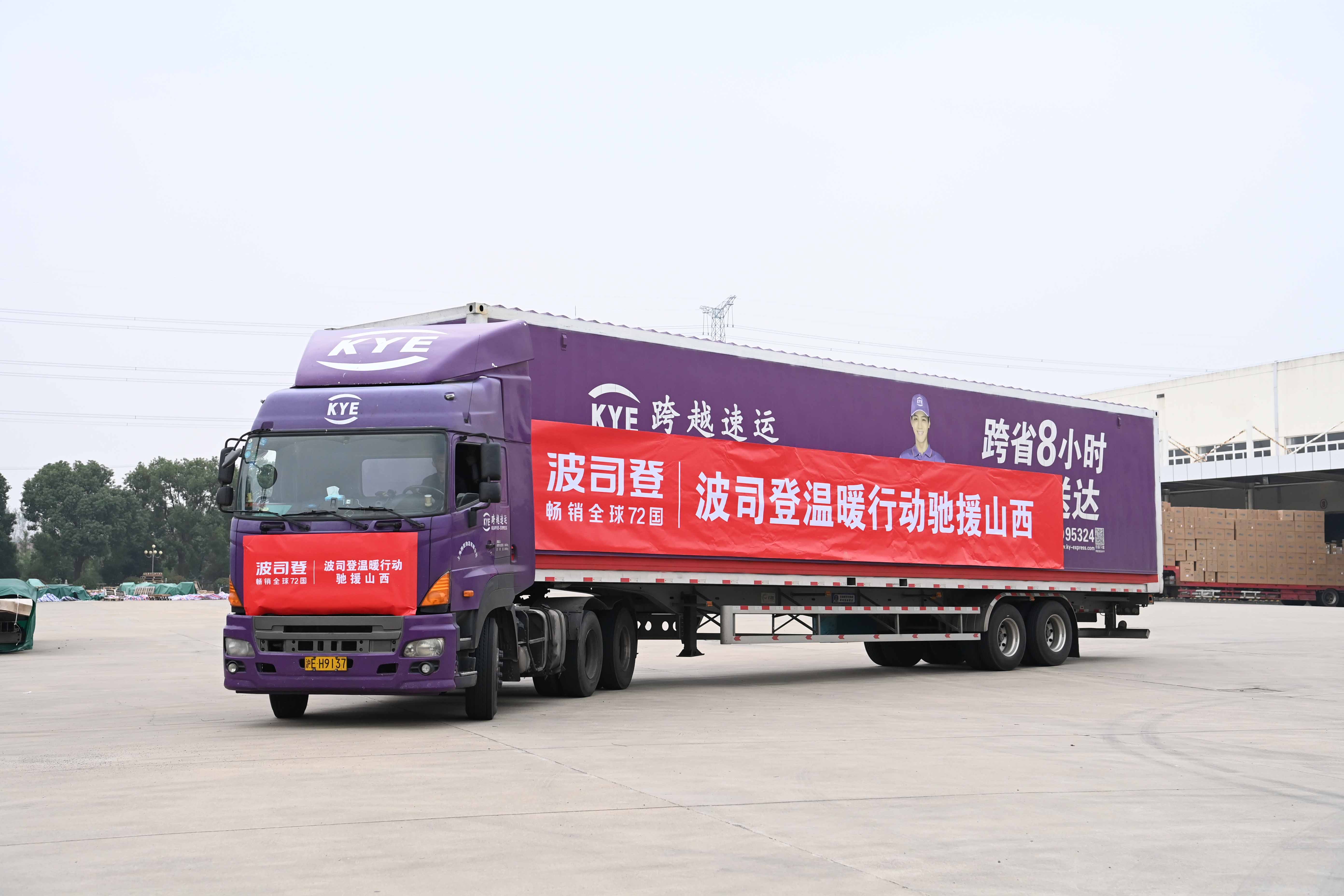 As Bosideng continues its product upgrading, it also finds a breakthrough to cater to the international mass market. The brand's close collaboration with high fashion designers has won attention on the international fashion stage. Bosideng has worked twice with Jean-Paul Gaultier, one of the most influential and treasured designers in France and former Chief Designer  who led the luxury dynasty into full bloom, to launch collaborative collections.

For three consecutive years from 2018 to 2020, Bosideng was invited to show at three top fashion weeks, New York, Milan, and London, where it demonstrated to the world a Chinese brand's professional craftmanship and design capacity, receiving celebration and recognition from consumers from around the world.

Four months later, Euromonitor International, the world's influential research agency, released a global down jacket research report, according to which Bosideng becomes No.1 globally in sales, both in sales amount and sales volume. The claim of Euromonitor International on Bosideng's global leadership is an important recognition for the Chinese label in the international market. It also indicates the strong momentum of Bosideng's performance in the global marketplace.

Bosideng, with an international presence and recognition from authorities, is now on the world stage to reach global consumers, enhancing its visibility and accelerating the expansion of its business in the global market.

Euromonitor International Claims Bosideng No.1 Globally in Down Jacket Sales

Making strenuous efforts in the down jacket market segment, Bosideng consolidates its core brand competitiveness through craftsmanship and innovation-led development. With uninterrupted upgrading in brand power, Bosideng has become a high-quality and fashionable down jacket label favored by consumers from around the world. Starting as a homegrown brand and targeting the global market step by step, Bosideng has emerged on the world stage as the No.1 brand by down jacket sales with recognition from top authorities and ensures a promising outlook in seizing the global marketplace.